2019 has been one of our best ever years for creativity.

So before we hit 2020, we thought we’d look back on what has been a memorable year for everyone at Cow…

The biggest news of the January football transfer window (if we do say so ourselves) was the announcement that seventh-tier football team Wingate & Finchley FC had appointed an AI as its coach. Said AI, which we dubbed ‘Alexa Ferguson’ was an idea we made for our brilliant client The Big Bang Fair to inspire more kids to consider STEM subjects and careers. It got loads of coverage and the AI helped the team to a 1-1 draw, which ultimately helped save them from relegation. We motored our way into the black hearts of Kraken lovers for Valentine’s Day by launching The Kraken Rumantics delivery service. The Kraken’s most loyal fans were given a chance to win a visit from a gang of motorcycle riders that delivered packages with everything they’d need for a ‘rumantic’ Valentine’s Day. As part of our ongoing work with Red Stripe and music, we got Bedford’s favourite son Tom Grennan to swap the microphone for a pair of boots by arranging a trial with his home club Luton Town. March was the month of one our most successful campaigns ever. Again for The Big Bang Fair we had the idea of challenging two synchronised swimmers to perform their routine in a pool full of plastic. It went viral, with huge amounts of coverage and social engagement and bagged us a bunch of awards noms and wins (more on that later). We won a PR Moment Award for our ‘Scam Avoidance School’ campaign on behalf of Santander. Black Bush Stories is a series of events exploring the parallels between making whiskey at the world’s oldest working distillery and some of the UK’s most celebrated crafts. We kicked off the first of the 2019 Black Bush Stories events with an exclusive cheese and whiskey pairing workshop at TT Liquor in Shoreditch. We work for the excellent SpareRoom. Flatsharers love Eurovision parties. Eurovision is officially the cheesiest event in the world. So naturally we created a 41-cheese Eurovision pizza, with a cheese from every nation competing in the song contest. It was the ultimate snack for any flatshare’s Eurovision party and was a massive hit with both the press and the public. This month we also staged a live photography exhibition for Sexton whiskey. Bringing to life our brand platform ‘own the night’, we sent photographers across London after sunset to capture stunning pictures and send them back to a gallery seconds later. The start of summer saw us do our first idea for the inspirational Institute of Cancer Research (ICR). To highlight the fact the charity and academic institution needs urgent funds to finish its revolutionary new cancer research building we worked with the Royal Philharmonic Orchestra to create an original piece of classical music that was made deliberately unfinished. 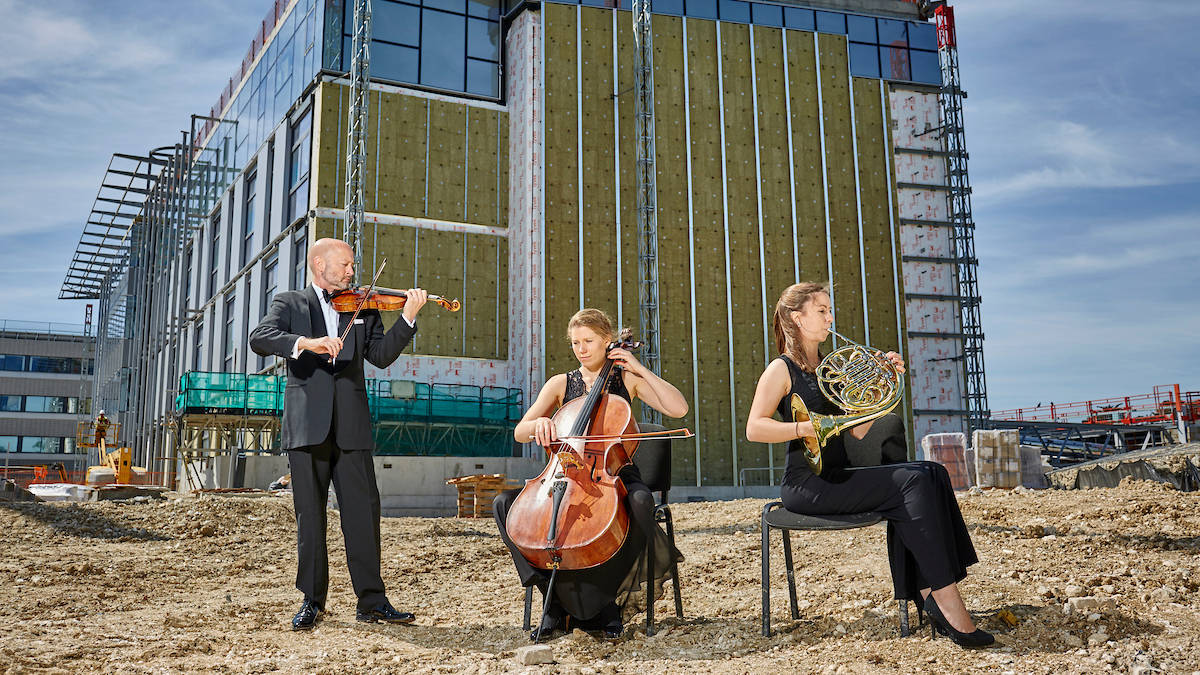 We PR’d the annual Lagunitas Beer Circus: a festival of the weird… and beer. Send in the clowns: Our second Black Bush Stories event took place this month, this time delving into the world of foraging and using botanicals in whiskey cocktails. June was also the month we teamed up with 60-minute makeover presenter Peter Andre to restore a rundown community orchard in Manchester against the clock. The project celebrated Bulmers’ five-year partnership with orchard-restoration charity The Orchard Project. After cider we turned our attention to beer by helping with the opening of a unique pop-up ‘BYOT’ restaurant for Birra Moretti. That’s Bring Your Own Table. Cheffed by Gennaro Contaldo, the Italian dining experience was free if you brought your own table to the restaurant. It was designed to amplify the brand’s summer mission to get more people together around tables. Keeping with quirky restaurants (and booze) we began July by opening a pop-up for Kraken Rum, where guests dined inside a thunder storm. In what was in no way a logistically challenging project (!) we created a dining room with thousands of litres of indoor rain, howling winds and lightning. The food was quality and the experience brought to life the story of the Kraken and its signature cocktail the Perfect Storm. 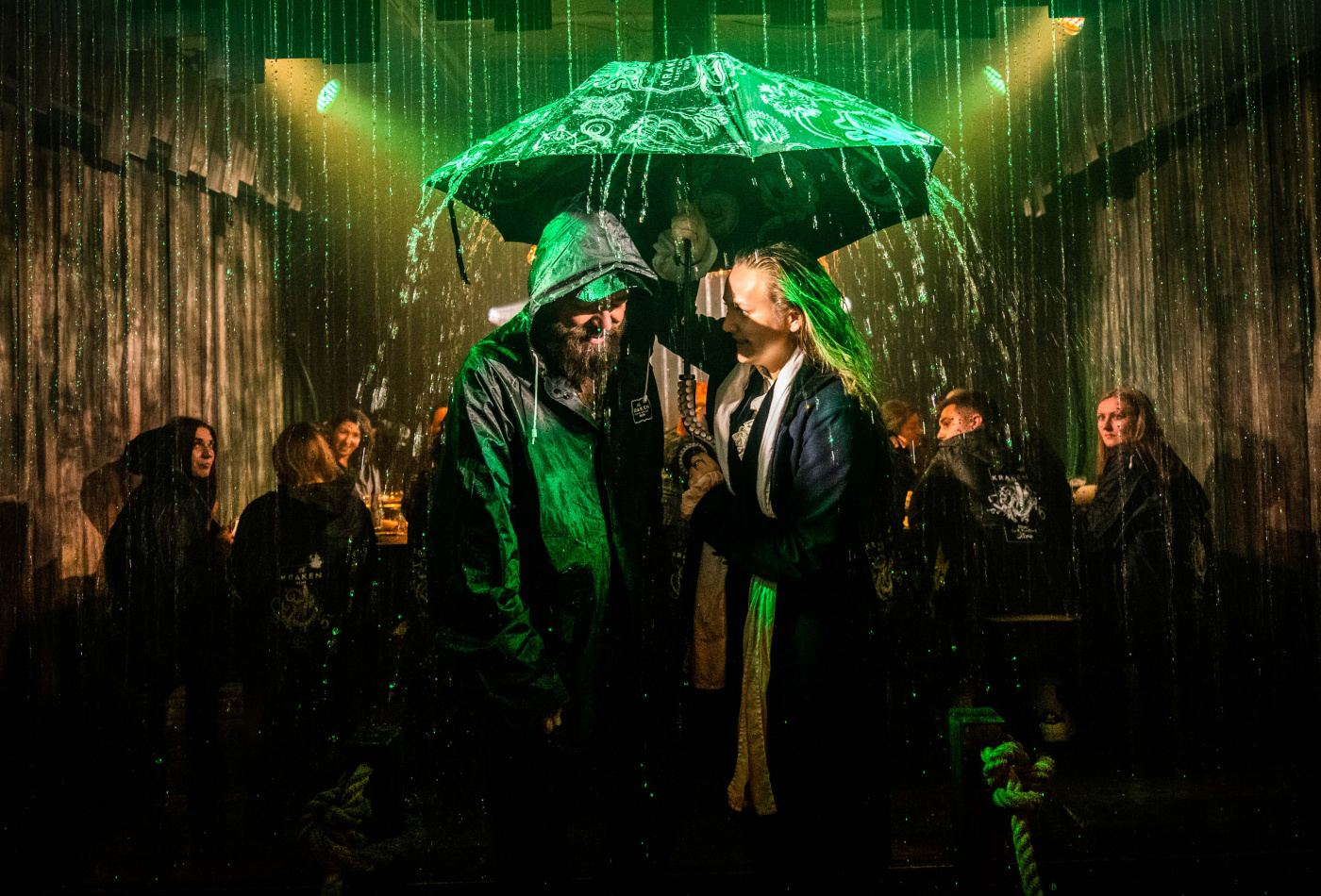 Before we’d even had a chance to dry-off we were hitting the road in a convoy of Fiat 500s – accompanied by a squad of grannies. Not just any grannies, mind, but Italian nonne. They were the stars of Birra Moretti’s ‘Deliver-a-Nonna’ service: proper Italian nonne, delivered to people’s houses to cook home-made Italian food for them. We were nominated for a bunch of PR Week Awards and Creative Moment Awards for our swimming in plastic idea. Nice. We launched Santander’s fraud-prevention partnership with Kurupt FM with an event that mashed up the worlds of banking and pirate radio. As supporting news generation, we also ran a story for Santander revealing the most dangerous celebrities to follow on social media. And as if that wasn’t a busy enough July, we rounded out the month by kicking-off our latest campaign for David Lloyd Clubs. In what was an industry-first, the brand announced that it was committing to employing over 55s personal trainers in every one of its 116 clubs. Oh and we moved offices. Waving goodbye to Bermondsey after 11 years we returned to Shoreditch. To an office on Cowper St…

For our second Institute of Cancer Research campaign we commissioned new Poet Laureate Simon Armitage to write a 51-word poem that was then micro-engraved onto a tiny anti-cancer pill by acclaimed artist Graham Short. The idea delivered outrageous coverage and continued to raise awareness of the ICR’s groundbreaking approach to finishing cancer. The poem on a pill is now on tour before it gets a permanent home in the ICR’s new cancer research building next year. We launched an important SpareRoom campaign to battle loneliness among flatsharers. To amplify their partnership with LadBible, we appointed chef and mental ambassador Andrew Clarke as Britain’s ‘National Loneliness Chef’. In the role, he creates original recipes that are perfect to share with flatmates. We also won a Creative Moment Award for swimming in plastic. Very nice! In what was a complete creative coincidence, our first idea out of the blocks this month was another pizza one. This time  we created the pizza of the future for The Big Bang Fair. It was made with cricket dough, soil-free tomatoes and almond cheese. Kids loved it. So did the press. Next up was another fun one for SpareRoom. Riding the wave that is millennial’s obsession with houseplants we created the first ever bedtime stories for plants. Yep. Stories to read to plants to help them grow. The final in our trilogy of October ideas was a huge undertaking for the Kraken team. For Kraken’s annual Screamfest Halloween event, we worked with legendary horror filmmaker Neil Marshall to direct a unique immersive bar experience. Neil’s idea was pant-wettingly scary – as you might expect from the director of The Descent – and was the first bar to get a rating from the BBFC (18, of course). November was the month that we helped launch the inaugural #ThisIsEngineering Day for the Royal Academy of Engineering. We got loads of major household brands to demonstrate how engineering surrounds us in our everyday lives, while also issuing a rallying cry to smash the ‘white man in a hard hat’ engineering stereotype and showcase the many different faces of engineering. This month we also picked up two PRCA National Awards for our swimming in plastic idea. Here’s the team on stage with Radio 5 Live’s Emma Barnett and a man in a kilt. We once again helped Heineken UK with its annual Brewing Good Cheer project, which uses pubs to help combat loneliness. This time we worked with none other than Eamonn and Ruth.

And that’s just about it.

A jam-packed year of creativity.

Thanks to all of our awesome clients for letting us do these ideas.